Previously installed Arch Linux on my wife’s old MacBook Air. Then just recently, due to the need of using Zoom Meeting on a device, I tried to re-use this MacBook Air again.

Sadly, Mac OS X 10.6.8 is not supported anymore. I cannot install latest Google Chrome, latest Firefox, or Zoom. The only solution is running Linux on it.

First of all, I have to update Arch Linux. However, the last update was in November 2019. Due to WiFi driver issue (slow, damn slow!), I just remove all unnecessary packages, such as LibreOffice, Wine, SMPlayer, Audacious, etc, and do the upgrade according to this forum post.

There are two main problems in MacBook Air when running Arch Linux: (1) Wi-Fi and (2) graphic card.

For WiFi, at the end, I blacklist bcma. It is damn slow. For Internet connection, I just solve it by using Android phone USB tethering. That’s far more better than WiFi download speed, which is around 200 kilobytes per second.

The second problem is nvidia-380xx-dkms driver. Since it is old machine, I use linux-lts kernel, which can work smoothly with nvidia-380xx-dkms. However, I am not sure what’s the reason, if running glxgears, the OpenGL fails to work. OpenGL is required for Zoom to run. Luckily, I found that if I restart lightdm, then OpenGL will be able to work, so does Zoom.

Moreover, there is a bug fix on scope search.

Imagine that, if I can generate musics, then I can create my own game with any random background musics.


If you feel that Hades is too difficult to play, and want to cheat, can try the following patch in Content\Scripts.


To play Windows games on Linux, Wine is necessary. Even Steam Proton is also based on Wine.

In my opinion, to configure Wine to the best compatibility, we need to install several libraries (DLLs) using winetricks.

Then it is able to use Vulkan for DirectX 9, 10, and 11. For more details about dxvk and Vulkan installation, can read here and here.

Recently, I found that some games require Media Foundation for playing movie. Though winetricks can install Media Foundation, it doesn’t work. A more promising solution is mf-install.

I also experienced that, quite a lot of games cause my laptop to produce loud fan, due to the heat. I prefer performance rather than good graphics. At the end, I found that, libstrangle is able to solve the problem. I use 25 FPS for most of the games.

Just in case you need to render some CJK fonts, can try to import this registry file using regedit, then run the wine with LANG environment variable. However, this solution only works on the Window user interface like menu items.

For some games that render CJK fonts, may need to install the font and also fontconfig.

I experienced that, Alt-Tab causes the game not functioning. To solve this issue, emulate virtual desktop is the best solution. This can be done by using winecfg. Alternatively, we can run

To understand Wine prefix, read here. I personally uses this script to manage Wine prefix. Because some installations require to run Wine as Windows XP, but the game can only run with Wine as Windows 7 and above. Keep changing the version with winecfg is inconvenient.

Besides that, some games may require dotnet4x installed. Yet dotnet may break other games in the same prefix.

Use Proton as an alternative

Some of the games may have poor performance on Wine. In that case, can try on Proton. I have wrote a script to make the Proton invocation easier.

But my personal experience is that, Proton doesn’t have good support on joystick/gamepad as Wine.

Note: Proton version 5.x has an issue that I have reported here.

Not only Wine libraries affect the games, Linux libraries are also important to make the games work, for instance, Vulkan. This wiki page suggested several libraries as well.

I found that ProtonDB is a good place to find whether a game is compatible to Proton. And some users also shared the solutions on how to make the games work.

Just in case we prefer to run certain apps without Internet connection, we can use firejail. Eg, firejail --noprofile --net=none wine explorer.


I faced the login issue with Evernote since around two weeks ago. It leads me to a blank page, with the HTTP status code 418. There is similar issue reported here. I made the bug report, but the issue not yet solved. Looks like it happened in Malaysia and Vietnam according to the forum. Suggested solution in the forum was to use VPN.

This is how I solved the issue as a temporary solution to login.

Try to login successfully from the web, by luck or by Tor browser or any VPN related connection.

By enabling the above, I can just sign in with my Google account, which skips the status code 418 issue.


I released version 3.6.1 for my hobby project, Med (Linux Memory Editor). There are several great changes in UI (since 3.5), especially the larger window, due to more components in the UI.

Now it supports named scans (the bottom part of the window). 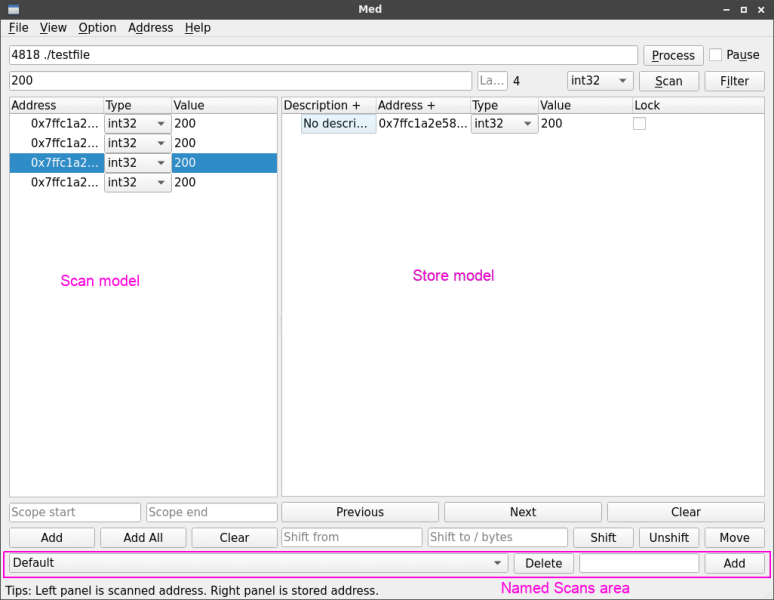 I create this named scans feature because sometimes I need to scan for several values of interested. For example, a game character A’s experience point and character B’s experience point. By using named scans, I can scan these two values without destroying the scan result of each others. This makes my (game cheating) life become much easy. 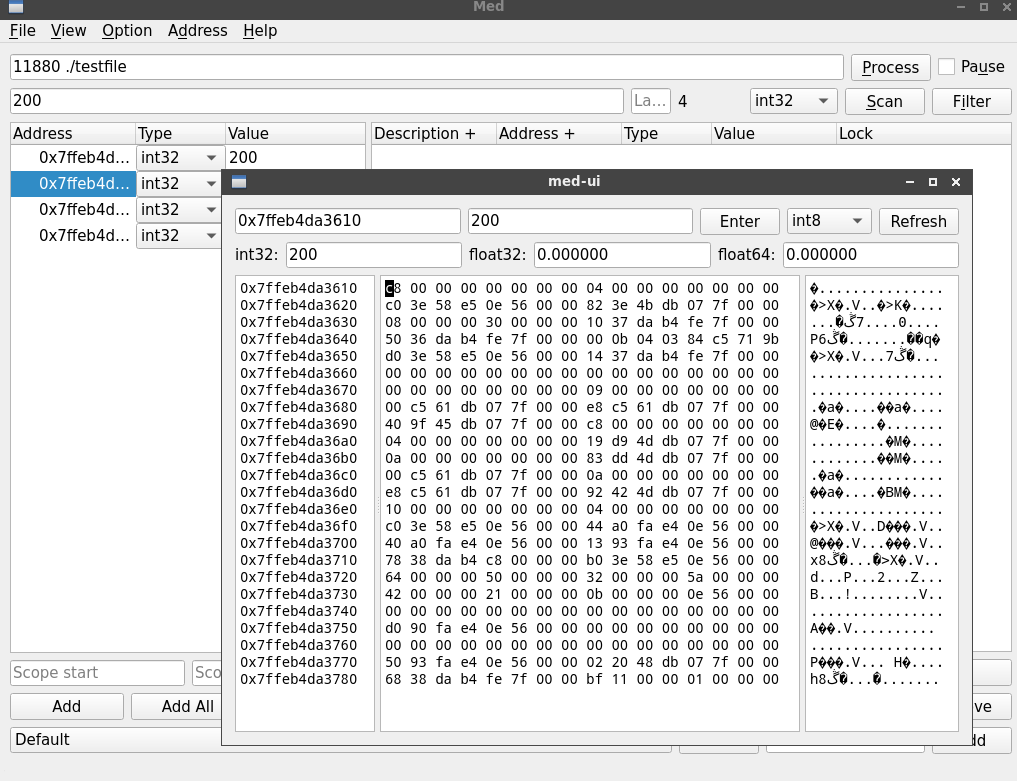 Memory editing is now improved with preview the values in int32, float32, and float64 (double as in C/C++). This is useful for me to discover the pattern surrounding the game character status. For example, there is a game I played, the character has non-rounded float32. This causes me failed to search the values for various trial. Lastly I found the address by scan unknown. By using these three values preview, I can discover the values easier without doing actual scanning.

Furthermore, memory editing now supports “entering” the value according to the scan type (the Enter button). In the versions prior to 3.6, memory editing can only directly edit the hexadecimal. This is troublesome to edit the float values. Previously, I have to create a new memory address in the stored list, then edit the value. But now, I can update the values directly.

Besides that, in the memory editing, it supports “string” scan type, for entering the string directly.
WARNING: Longer string may cause the memory overflow.
NOTE: Entering string is not null-terminated. Add the null (0) value at the end if necessary.

Lastly, I fixed the cursor in the memory editing (hexadecimal area).

But the problem is that, the guide is written for CE (Cheat Engine). Unfortunately, CE is for either Windows or Mac. And to cheat in Sea Dogs, need to use “Group Search” feature of CE. WTF is Group Search?

After some studies from here, finally I wrote similar feature on Med. The related source code can be found here (not yet merge into master branch). I use similar syntax as CE’s Group Search.

The current code in Med uses block alignment 8, which cannot be changed, since I am doing experiment. Different from CE, I use comma separation instead of space separation. The s is string, follows by single quotes, w is wildcard. So far I only wrote the code for s and w. Nothing else.

Yeah! Now I can play the protagonist as superman.


I am in dilemma of choosing Brave or Chromium as my default browser.

The following is my comparison,

I am still continue using Brave, because I prefer Brave over Firefox on Android. In order to conform with Brave on Android, I choose Brave on desktop.

Besides that, Brave has built-in Tor. Alternatively, we can use Tor Browser (based on Firefox), which means I need to use two browsers: Firefox and Tor Browser.